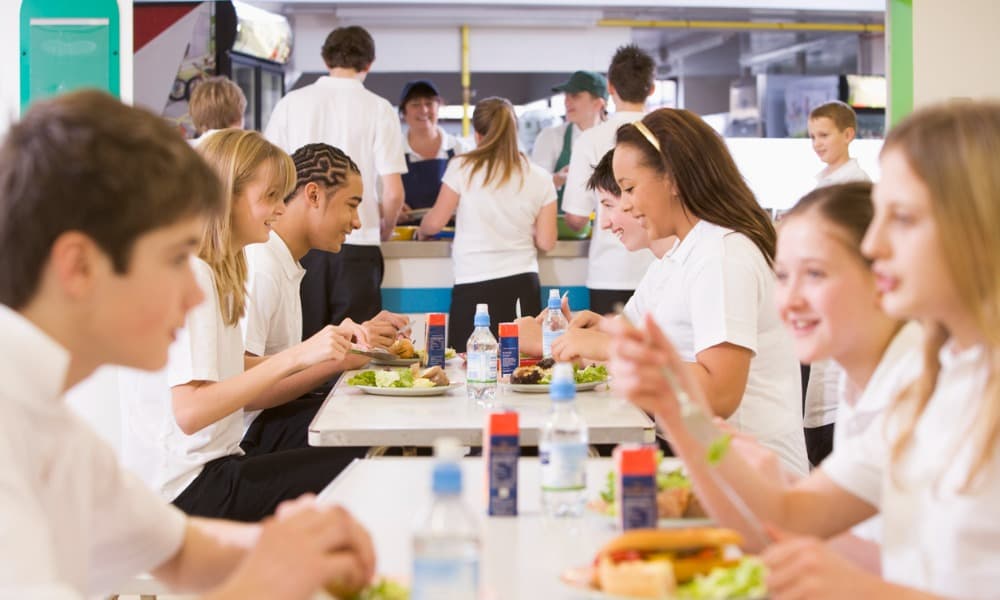 It’s essential that parents and guardians keep a close eye on children’s sodium intake. Learn what the USDA is doing to make school meals healthier in 2022 and beyond.

Data from the CDC reveals how critical low-sodium meals are for students. Children consume around 15% of their daily sodium at breakfast and 30% at lunch; 45% of their entire RDA in a few hours. A glance at FDA figures for the age groups 5 to 8 years, 9 to 13 years, and 14 to 18 years further underlines how prevalent excessive sodium consumption is among school-aged children.

This is a dangerous dietary lifestyle that only increases their chances of developing hypertension, heart disease, and heart failure in later life. Sodium levels must be limited to protect our children’s health. Read our guide for more about why reducing sodium in school meals matters so much.

Schools provide children with these two essential meals; unfortunately, they may be the only ones some children consume each day. Dinner at home isn’t a reality for every child, every evening, which could be due to either financial hardship or shifting family dynamics.

The USDA’s annual food insecurity report revealed that 274,000 households with children had to skip meals, go hungry, or not eat for days in 2021. Students from food-insecure homes may therefore rely on school meals as their primary source of nutrition.

Children who do have the luxury of dinner spend only half those mealtimes with their families. This means kids are either losing out on dinner entirely or substituting with snacks and other processed/pre-packaged foods – options that are responsible for roughly 70% of sodium in the daily American diet.

Schools have therefore become essential locations for sodium awareness and limitation, as it’s the only adult-supervised nutritional environment that many children – for one reason or another – consistently eat in. Educators and food manufacturers must have no doubts about why reducing sodium in school meals matters for the current and future well-being of students across the nation.

2023 will mark the beginning of a new era for sodium in school meals, with 2022 laying the first foundations for positive change. The USDA’s final rule, titled “Transitional Standards for Milk, Whole Grains, and Sodium,” took effect on July 1, 2022. One of its goals is to reduce the sodium content of school meals by 10% by 2024.

Another goal is to instill healthier dietary habits at a young age so students will grow into nutritionally smarter and healthier adults. The 2022–2023 school year has been assigned Sodium Target 1 (a continuation of currently recommended sodium levels), with the 2023–2024 school year seeing the implementation of Sodium Target 1A (the 10% decrease). This will complement the USDA’s proposed rule that at least 50% of the grains served to school children are whole grains, which are naturally low in sodium.

The initiative will receive further when the USDA will issue a proposed long-term rule based on partner feedback and the latest Dietary Guidelines for Americans. The 2024–2025 school year will see the final rule established and all necessary nutritional measures implemented.

Educators and food manufacturers will benefit from a closer look at the USDA’s proposed schedule and sodium limits for school breakfasts during Sodium Target 1:

National school lunches must conform to the following equal to or lesser than sodium limits effective July 1, 2022, and July 1, 2023, respectively:

Any healthy reduction in school meal sodium should be considered a good thing; however, the USDA’s system isn’t perfect. Their Q&A sheet reveals that these limits don’t apply to every daily meal. Schools are clear to serve “a relatively high sodium meal or high sodium food” in a week, provided this is balanced by more low sodium meals in the same period.

Ultimately, the USDA is to be commended for its low sodium goals and the many resources it makes available to schools and other stakeholders to encourage and enable healthier school meals. These include Tools for Schools (designed to help schools meet new nutritional standards) and extensive resources for smarter snacking.

Manufacturers who supply food of any kind to schools (particularly pre-packaged or processed foods) cannot remain ignorant of their influence on a student’s present and future quality of life. The USDA’s goals are in harmony with many other national and global health organizations that are setting a new low-sodium bar for producers.

Our earlier blog summarized the FDA’s Guidelines for Industry, which, although voluntary, are in line with a growing public demand for lower-sodium snacks. The World Health Organization also aims to reduce global sodium intake by a relative 30% as member states participate in “Target Salt 2025” and its related programs.

The Dietary Guidelines for Americans 2020–2025 recommends a daily sodium intake of less than 2,300 mg for those aged 14 and up and even less for those aged 13 and under. The world is changing for the better, and food manufacturers must adapt to fulfill their vital role in healthier school meals.

At MicroSalt®, we understand why reducing sodium in school meals matters. MicroSalt® is a revolutionary approach to sodium that uses our patented, all-natural salt particle to deliver 50% less sodium by weight with twice the salty taste.

We can help food manufacturers and other low-sodium stakeholders move toward a school menu to be proud of. Just contact us to learn more about our mission and how to make MicroSalt® part of yours.